OAT Scoring Breakdown: Everything There Is To Know

The Optometry Admission Test, OAT for short, is a competitive standardized test designed to measure a pre-optometry student’s general academic ability and comprehension of scientific information.

This test provides optometry education institutions with a means to assess an applicant’s potential for success in the various optometry programs.

As such, getting a good score on the OAT is every student’s dream, as this will not only build their confidence but also help strengthen their application.

However, understanding what counts as a good score on the OAT will require you to have some basic knowledge regarding how OAT scoring works in the first place.

How Is The OAT Scored?

Optometry Admission Test scores are reported in a range from 200 to 400 for each of the OAT sections, but what does this really mean?

Well, you first have the six individual OAT scores referring to what you scored in each section: Biology, General Chemistry, Organic Chemistry, Physics, Reading Comprehension, and Quantitative Reasoning.

There are also two composite scores, namely, the Total Science Score and the Academic Average, and then you have the overall OAT score.

Let’s take a look at each of these different scores.

How Does OAT Scoring Work?

Each OAT section yields a raw score, which simply refers to the sum total of the number of questions the candidate answered correctly.

If a candidate answered 20 questions correctly in the Physics section, then their raw score for that section would be 20. Simple as that.

b) Scale Score or Standard Score

Raw scores are converted to a scale score using psychometric equating procedures. These scale scores range from 200 to 400 and are reported in increments of 10.

If, for instance, a test taker leaves out a section of the exam, they would receive a raw score of zero in this section, which then corresponds to a scale score of 200.

The whole idea of using scale scores is to fairly compare the performance of examinees who attempted different editions of the exam over the years.

By using scale scores, different forms of the OAT exam are placed on a common measurement scale accounting for minor differences in difficulty. This way, candidate scores over the years can be compared meaningfully regardless of the year when you took the OAT exam.

This is why scale scores are used in the official OAT score reporting.

The total science score refers to the scale score corresponding to the raw scores of the entire Survey of Natural Sciences and Physics sections.

This means the total science score is based on the cumulative raw score comprising your raw scores in Biology, General Chemistry, Organic Chemistry, and Physics.

These science sections have a total of 140 questions, and this is the overall raw score from which the total science score is derived.

While the Total Science Score covers only the science sections, the Academic Average covers all six sections of the OAT exam.

The academic average is a composite score derived from the mean of the Biology, General Chemistry, Organic Chemistry, Physics, Reading Comprehension, and Quantitative Reasoning standard scores.

To derive your academic average, add up your scale scores in each of the six sections, then divide the sum by six and round that off to the nearest integer, following the 10-point interval rule.

Because of this, therefore, one student may end up having the same standard score as another student with a relatively higher or lower raw score.

The OAT is not scored on a curve. Rather, OAT standard scores take into account the examinees’ ability and the difficulty of questions asked in the exam.

This way, standard scores allow for direct comparison between examinees, even those who’ve taken the OAT in different years.

Nevertheless, keep in mind that the chart provided above should simply be used to estimate your standard score from your raw scores to give you a basic idea of how the OAT score conversion is done.

The exact conversions for the real OAT exam will vary because they are calibrated on an exam-by-exam basis.

What Is A Good OAT Score?

There is no official passing score for the Optometry Admission Test.

As such, each optometry education program makes its own determination as to what constitutes an acceptable score on the OAT.

Ideally, assuming a comparably skilled set of examinees is sitting for the exam, the average scaled scores for every test in the OAT would always be exactly 300.

Simply put, the OAT is scored in a range between 200 and 400; therefore, the median will always be 300. However, in large testing scenarios, such ideals are rarely ever achieved.

Instead, some variation in scores is inevitable, which is where the scale score standard deviation of 40 comes in.

According to data collected from the 2021 OAT exam, here’s how students performed, indicated by the average OAT score achieved in the various sections, thereby showing the 50th percentile scores in that particular exam.

As such, you can see that students performed better in Quantitative reasoning, therefore resulting in higher average scores, as compared to Physics which registered the poorest performance and, correspondingly, lower average.

This perfectly explains standardized testing, whereby students’ scores are compared to those of their fellow test-takers.

So whether your score translates into a good or bad score will entirely depend on the performance of the other examinees on the exam.

That being said, considering the current data set, what translates into a good or bad OAT score?

A high OAT score would be anything at or above the 90th percentile, meaning you performed better than 90% of the test takers, therefore placing you in the top 10%.

An extremely high score would mean you scored in the 99th percentile, translating into a total science score of 400 and an academic average of 390.

A competitive OAT score would be anything at or above the 75th percentile, meaning you performed better than 75% of the test-takers, therefore placing you in the top 25%.

For your OAT scores to be considered competitive, you would need to have a total science score higher than 330 and an academic average higher than 340.

A good OAT score refers to an average score, meaning you performed better than or as well as 50% of your fellow test takers, placing you in the 50th percentile.

For your OAT scores to be considered good, you need to have a total science score of at least 290 and an academic average of no less than 310.

A below-average OAT score is anything that places you below the 50th percentile scores, meaning you have a total science below 280 and an academic average below 300.

This typically translates into a very low OAT score, meaning you performed more poorly than the average test-taker.

What Is A Good OAT Score For Optometry School?

While there are numerous optometry programs that will give you admission as long as you score in the 50th percentile, competitive schools tend to be more selective and typically won’t accept anything lower than the 75th percentile scores.

A good OAT score for optometry school would be anything above 320, at least placing you in the 60th percentile.

Different schools have different cutoff minimum OAT scores, some being as low as 280, whereas others have a cutoff as high as 350.

Ideally, OAT scores above 300 are considered good enough for optometry school, but of course, a higher score will give you that much of an edge over your fellow applicants.

It is also worth remembering that OAT scores are just one of many factors that would determine your admission into optometry school. Admission committees will consider your application package as a whole which includes your GPA, among other factors.

What Is A Passing Score On The OAT?

A passing score on the OAT is considered to be 300. This is the median score, meaning you at least performed in the 50th percentile.

The passing score may place you ahead of the pack. However, it still won’t be competitive enough to guarantee you admission into an optometry program, especially if you are eyeing a particularly competitive school.

Yes, 330 is a good OAT score because it at least places you in the 75th percentile.

This means that 330 is actually a competitive OAT score, placing you in the top 25% of all test takers.

Do You Get OAT Scores Immediately?

Yes, immediately after your testing session ends, you will receive an unofficial score report provided at the testing center. Remember, though, that this is only for your personal use.

The official scores are released within 3-4 weeks of the testing date and are reported electronically to your selected schools.

What Is The Lowest OAT Score Accepted By Optometry Schools?

The lowest OAT score accepted by optometry schools during the 2022 cycle was 280, and this admission was into the Inter-American University School of Optometry in Puerto Rico.

All this is according to data obtained from the Association of Schools and Colleges of Optometry for the 2022 optometry entering class. 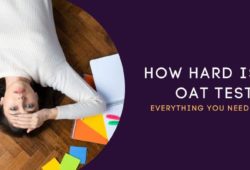 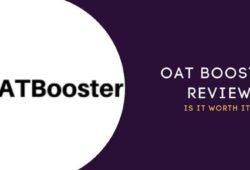